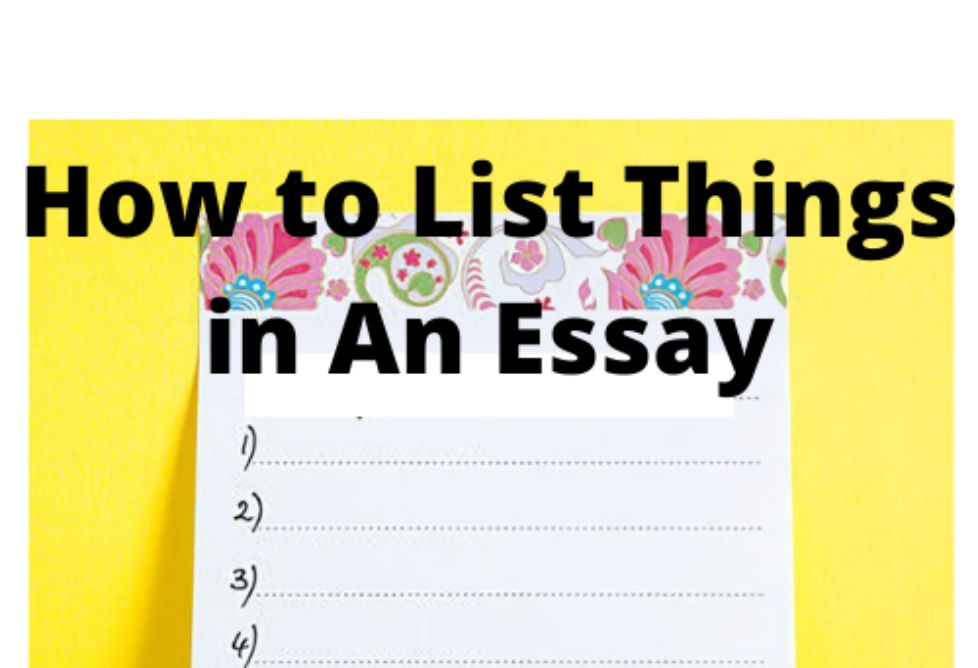 Essays usually follow a consistent format but every now and then something happens to throw that pattern off. Lists may be required in essays, which might throw off the piece’s general formatting, organization, and syntax. Let us go through how to list things in an essay.

When adding a list of subtopics or themes, lists of recommendations, phases of analysis, components of an item, and the like, readers often get your point fast. The key to using lists in an essay is to employ proper punctuation and grammar, as well as to maintain a consistent grammatical style.

Anything less than 3 items should not be listed in your essay.

Lists frequently appear in essays, posing problems for formatting, paragraph structure, and grammar. When you include:

With lists, readers immediately grasp your message. Punctuation and parallelism in grammar are some of the important tools for creating lists in essays. Here is how to list things in an essay.

Bulleted lists aid in the organization of texts and project ideas by eliminating the necessity for a chronological order of events or concepts. Maintain a consistent listing style throughout. Following the bullet style, statements should begin with capital letters and end with simply the correct punctuation. Bulleted lists aren’t the best format for listings in chronological order.

The APA lists are quite effective at establishing concepts, and they are organized in a variety of ways based on the type of information conveyed.

Find the most effective technique of establishing the facts about your subject matter after reviewing your work and confirming that your professors do not prohibit bullet points.

Consider whether an MLA numbered list or any other APA list would showcase your content more effectively. Find a technique to list things in an essay, specifically the MLA numbered list, when the specific points of your topic require a specific order in which they must be given.

Bullets are a good option in research papers.

If there isn’t a specific chronological order, a bulleted list is another option for listing items in an essay.

Lists that aren’t too long should be organized as separate paragraphs or under their titled sections rather than as vertical lists. However, for extremely thorough information, the bulleted list is still the best alternative.

Bullet points should be indented at least one inch from the left margin, which is a standard recognized formatting style. Lists with double spaces and precise quotations from their sources are more efficient.

Create a brief topic sentence that explains your motives just as soon as you’re about to introducing a sentence, and then include all those items in your list in an orderly manner that pertains to that statement.

When Do You Use Bullet Lists?

When Bullet Points are not allowed

Watch closely for patterns in how frequently you employ them. The bullet points should not take up more than a quarter of the total space on your page.

However, there are some instances in which using bullet points in an academic composition is a strict no-no. Here are some examples of such situations:

For numbered lists, they’re ideal for describing a series of events or a logical arrangement of thoughts. When writing an APA format list, the standard format is to start with numerals and end with a full stop. The next logical step is to begin your listed item with a capital letter after the period has been removed.

In their papers, psychologists and experts in the social sciences use the APA style. These APA lists are quite effective at establishing concepts, and they are organized in a variety of ways based on the type of information conveyed.

There are numerous methods for enumerating things such as statements. The first of these ways involves writing the number in parentheses: Here’s an illustration:

It’s important to pay attention to the numbers inside the parenthesis, and it’s not a good idea to utilize only one bracket once the number has been written. If the introduction of your supporting claim is an incomplete sentence, do not begin the list with a colon. You could try the following:

Here are the pieces of evidence: (1) the first evidence, (2) the second evidence, and (3) the third proof.

If one of your pieces of evidence also has a comma in the middle, use semicolons to separate the elements. Changing it from a run-in text to a vertical list is the easiest method to get around this.

This other way to list data include separates statements using the serial versions of the numerals.

It is not a good practice to use semicolons to join all the pieces into one big claim since itemizing facts into one phrase necessitates the use of parentheses.

In this case, semicolons are utilized to properly divide APA-styled lists. They often use (a) lowercase letters; (b) within parentheses; and (c) semicolons to divide their sentences.

They often use (a) lowercase letters; (b) within parentheses; and (c) semicolons to divide their sentences. You should get the idea from there.

To identify elements in a list, Oxford commas are employed in run-in-texts. It’s known as the serial comma, and it comes before the conjunction. The main ingredients for recipe ABC are tomatoes, chilies, onions, and cilantro.

5. The First Sentence of the Introduction

When you create a numbered or unnumbered list in conjunction with a thesis statement or the introduction sentence, you have the option of either concluding the list or leaving it incomplete. It all depends on the structure of the essay and the methods used to list items. The colon should only be used with statements that have been completed.

A good example would be: “When making the perfect cup of coffee, you would usually need the following ingredients:”

Other than that approach, you could write “For the best cup of coffee, ensure that you” — think this approach only if every item on the list could self-sufficiently conclude a sentence that began with this structure.

Sometimes, what you need to list come as a complete statement, then each list item can be a single word, an expression, or a complete sentence, depending on the situation. The only requirement is that you adhere to a consistent pattern throughout the list. If you find yourself in this circumstance, write it in all capital letters and only use the full stop for complete statements.

Only statements and phrases that help to bring the structure to completion should be used when it is still unfinished. There should be a period at the end of each of them. Never use commas or semicolons, and avoid appending items from the second to the final one in a list unless necessary.

Ensure that your plans for really using that structure are expressed in that manner prior to deciding on a list format. For short itineraries with only a few things to say about each of them, it is ideal to utilize them as a statement in the run-in text. It is necessary to utilize a semicolon in order to neatly arrange the elements that will be listed within the sentence after the colon.

In contrast to our first case, lengthy statements that are to be incorporated into lists are difficult to deal with when they are presented as statements alone. In this case, the things should be separated into separate paragraphs or mentioned within a single lengthy paragraph, depending on their importance. It is best to break up long sentences inside a paragraph into separate paragraphs and number them in an essay. It is also best to bullet point or title them in an essay.

The usage of dividers such as “2)” or “(b)” in lists created with run-in-text should only be done when absolutely essential. The language and punctuation, in other words, fall short of the purpose of distinguishing the items on a list. Furthermore, despite this, you might want to think about doing a second rewrite to alleviate the complication and improve the overall comprehension of the section.

Using roman numerals and lowercase letters alternately, create simple outlines with a number of levels of difficulty. This method of defining your work and identifying each item in a list is the most effective technique to use multilevel lists. You should follow this order:

How to List Things in an Essay APA Style

Always make sure that all of the items on a list are syntactically and conceptually equivalent. For example, all of the items could be nouns, or all of the items could be phrases that begin with the word “and.” In the vast majority of cases, lists are simple lists in which commas (or semicolons in the case of lists in which items contain commas) are used between items, including immediately before the final item (see more information and examples on the lettered lists page). The use of lettered lists, numbered lists, and bulleted lists are all permitted in APA Style in order to draw additional attention to specific items.

Bulleted and numbered lists are permitted by the APA Style rules; however, if you’re unsure whether or not your instructor will allow them in your assignment, you should check with your instructor before submitting your work. See the section below for information on how to format lists.

Bulleted lists in the APA format

Depending on how the sentence is structured, the capitalization and punctuation for each bulleted item will differ. The first letter of the first word in the bulleted text should be capitalized, and the paragraph should be terminated by placing a period after the last bullet (see “Lists, Part 5: Bulleted Lists” in the APA Style Blog). As an illustration:

This is the final sentence of the bulleted list.

The bulleted list that separates three or more elements within a sentence is “capitalized and punctuated as if it were a complete sentence,” according to the style guide (American Psychological Association, 2010, p. 64).

Bulleted and numbered lists are allowed by the APA Style rules, but if you’re unsure whether or not your instructor will allow them in your assignment, you should check with your instructor before submitting your work. Always keep in mind that, because bulleted or numbered items only provide undetailed information and do not include analysis, and because the goal of formal academic writing is to showcase your analytical thinking, these lists should be used sparingly in favor of conveying your ideas in full sentences and paragraphs. See the section below for information on how to format lists.

Vertical lists are uncommon in essays written in humanities departments around the world, and they are most often used as run-in text within a sentence, with a colon marking the beginning of the list.

As an illustration, “Mark Twain has written five books: The Adventures of Mississippi, The Prince and the Tramp, A Tramp At Home, Life on the Finn, and My Early Life”.

The colon, on that note, is not used before a list when the list if those items are the object of the verb that announces them.

For instance, “Mark Twain’s recently published books include The Adventures of Mississippi, The Prince and the Tramp, A Tramp At Home, Life on the Finn, My Early Life.”

Although it is possible to include numbered lists in an MLA essay, it is recommended that you avoid doing so as much as possible. The use of lists in your essay can be accomplished in a variety of ways, so you should inquire about your professor’s preferences before proceeding.