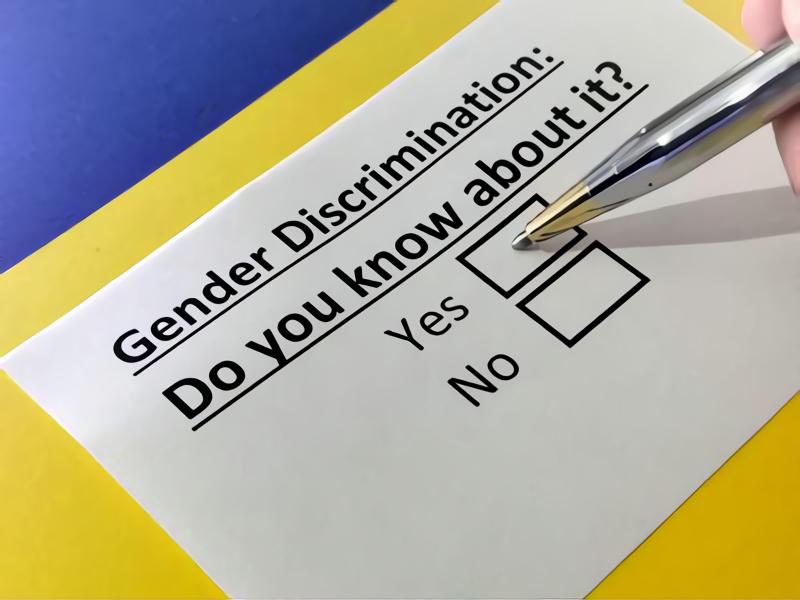 We look at essay topics on gender discrimination you can write about.

1. Gender Pay Gap and Its Impacts on Women Empowerment

Gender pay gap refers to wage disparity between men and women.  It can also refer to the difference in the number of male workers against female workers. Females in the United States earn roughly 81 cents (or less) for every $1 earned by males, according to statistics.

2. Factors that Influence Gender Discrimination in the Workplace

Today, gender discrimination remains a painful reality for both men and women. Recently, there has been an increasing worry about how workplace discrimination makes victims to become demotivated and lose morale, resulting in a loss of overall confidence and low self-esteem. This topic allows you to explore this phenomenon.

3. Negative Expectations of the Society on Women in the Workplace

Ever felt like you couldn’t complete a task because of circumstances beyond your own control? In Harper Lee’s work To Kill a Mockingbird, Scout’s gender has a significant role in how she goes about her life. It is possible to see expectations about how a girl is “supposed” to act in Scout’s household from the persons she interacts with.

4. Gender Representations and Sexism in the Media

Individuals of all ages, both young and old, can get a great deal of knowledge from the portrayal of males and females in the media. The media, in conjunction with other socialization influences such as family and colleagues, contributes to the formation of gender roles perceptions, and the behaviors that come from such perceptions can be influenced. This issue examines the evidence gathered from investigations into content analysis in order to establish the most prominent patterns in gender representations in popular culture.

Initially, when asked to think of on quite unfavorable sector women in the workplace, many of us would immediately conjure up images of blatant job discrimination, and particularly of sexual harassment. Despite the fact that we live in a new age in which such behavior is decried and made illegal, these linkages are in no way surprising. For most of us, misbehavior in the workplace is all too familiar territory.

A few decades ago, women were assigned the roles of wife and mother for the first time. They were expected to prepare meals and clean up after themselves. Even in today’s society, some of the disparities of the past can be seen in clothing, colors, and tax rates. Some women earn only 77 percent of what males earn, and they are forced to pay more taxes on necessities like food and clothing. Gender roles, prejudices, and unjust distinctions have a harmful impact on both women and men in equal measure. It is critical to eliminate these imbalances in the United States.

7. Examining the Dangers of Gender Stereotypes

Typically, what constitutes gender stereotypes and how do they work? They are in one way “simplistic generalizations about the characteristics, traits, and roles of individuals and/or groups based on their gender identities.” Stereotypes can be either favorable or negative, but they rarely provide true information about other people’s characteristics. When people instinctively apply gender assumptions to others, regardless of whether or not there is evidence to the contrary, they are contributing to the perpetuation of stereotypes. Despite the fact that many people are aware of the consequences of gender stereotyping, they continue to make these types of broad statements.

8. Analyzing the Causes of Gender Discrimination

We have a variety of factors that contribute to gender discrimination. The first and most obvious is illiteracy. Individuals who choose not to educate themselves will be relegated to living in previous eras. As a result, they adhere to sexist traditions and social conventions that date back centuries.

Education can effect a shift in this thinking since educated people are less likely to participate in gender discrimination than uneducated persons. Furthermore, poverty is another factor that is intertwined with the others in some way.

Gender discrimination is a problem in many regions since the economic dependency on male peers continues to be the predominant factor. As a result, women suffer disproportionately as a result of the same reason. They will never be able to break free and will be financially dependent on men for the rest of their lives.

In addition, the patriarchal structure of our culture has a significant impact. In this situation, the guy is in complete command of practically every element of life. As a result, individuals perceive themselves to be superior to others in some ways.

A great deal of violence and injustice is perpetrated against women in this manner. As a result, when one gender considers themselves to be superior to the other, it becomes more difficult for everyone to benefit from equal possibilities.

9. Evaluation of the Impact of Gender Discrimination on Physical Gender Violence

Scholars agree that gender discrimination has major impacts on society as a whole.  It has an impact on not only a single portion of society, but on the entire society as well. First and foremost, it has an impact on youngsters, who are susceptible to gender preconceptions from an early age.

Furthermore, it has an impact on young people since it has an impact on their behavior, academic choices, desires, attitudes, and other aspects of their lives. As a result, many girls do not participate in many sports, and women are more likely than men to be victims of physical abuse.

Following that, we have gender discrimination impacting adults as a result of a wage disparity between men and women in the working class. Men are paid more for doing the same amount of work as women are. In addition, women over the age of 50 are more likely than men to become homeless.

It also has an influence on aboriginal women, who have it far worse than other women. Women than men are 10 times likely to die as a result of family violence. Even for guys, it is detrimental since it establishes high standards that are impossible for them to meet.

It draws a line under men’s emotional vulnerabilities. As a result, they will never be able to really express their emotions without fear of being criticized. In a similar vein, men are not typically granted parental leave in many countries. In the end, all of this leads to an increase in male suicide. As a result, it has an impact on everyone.

10. The impact of gender discrimination on a Woman’s Mental Health

According to the World Health Organization (WHO), health outcomes for people are unequal both between and within nations, with disparity disadvantaging women over their lifespan in particular [2]. To this end, the overt social and economic inequalities that women disproportionately experience, such as lower rates of schooling and employment, lower pay for comparable jobs, underrepresentation in leadership positions, and a higher level of psychosocial stressors and problems, ranging from caregiving burden to intimate partner violence, all contribute to the disparity in earnings.

Have researchers found any evidence to support policies that promote growth by reducing gender inequality in the workplace? According to the authors, evidence based on variations among countries is of little value for policy planning because it does not establish a causal link between inequality and economic development. This, on the other hand, does not indicate that programs aimed at reducing inequality are unsuccessful.

To put it another way, the absence of evidence of a causal link does not imply that a causal link does not exist in and of itself. In order to build successful policies, it is necessary to conduct detailed micro studies that shed light on the mechanisms by which gender inequality affects development and growth.

Scientists and professionals benefit greatly from research projects organized by professional societies since they provide a good opportunity to share their findings, network with other like-minded researchers, and build collaborative contacts for future endeavors. However, in the field of research, these possibilities are rarely given evenly between men and women. It should be a top priority for all societies engaged in scientific research to address issues of gender inequity. Many STEM conferences, however, are battling with gender prejudices and the recognition that gender unfairness extends to non-binary gender and overlapping social identities as well as traditional gender roles.

The following essay topics on gender discrimination will also

13. A comparison of the gender gap in the income

14. Gender Stereotypes and Attitudes Toward Women and Men

15. Gender Gaps in Public Opinion about Lesbians and Gay Men

16. What Role Does Education Play in Addressing Gender Discrimination

21. The Prevalence of Gender Pay Gap among Women with University Degrees

22. Should We Turn the Volume Up or Down?

I got an A in this paper, thanks to the writer.

Wonderful writer, but forgot to include all references. Had to request for revision.

Did a fantastic. The writer made the changes as I requested and I love it.

A very good writer. You save me so much time.

This was my first paper and I\'m impressed. I will be coming back so that the same writer can do my research paper.